Posted on June 22, 2016 by rosemarymccracken

Today, I have Kalin Thompson with me on Moving Target. Kalin is the feisty protagonist of Kristina Stanley’s three Stone Mountain mysteries that are set in a ski resort in the Rocky Mountains. Descent, the first in the series, was released by Imajin Books last July, followed by Blaze in October. Avalanche will be released this Saturday, June 25, and is now available for pre-orders here.

Earlier this morning, here’s what Kalin told me about her latest adventure in Avalanche:

“On a cold winter morning, the safe at Stone Mountain Resort is robbed, and my brother, Roy, disappears. As director of security at the resort, I would normally lead the investigation, but when Roy becomes the prime suspect, I am ordered to stay clear. What can I do? I have to clear my brother’s name!”

Kalin, give readers a bit of your backstory before they first met you in Descent.

The worst day of my life was the day my husband, Jack, died. We’d only been married a few years. You can read my account of that horrible day at Who Is Kalin Thompson? Since then, I’ve met Ben Timlin, the hottest guy at Stone Mountain Resort, and he’s helping me heal. I’m now in my early thirties, live at a ski resort where I’m in charge of security and human resources. Basically, I’m responsible for all the drama that takes place at a holiday resort.

Do you think Jack was murdered?

I hope not. A car hit him while he was riding his bike home from work. The driver was never found, but I can’t believe someone would hurt Jack on purpose. Now I’m going to have to think about what you just brought up.

Was it difficult to get into a new relationship after Jack’s death?

At first, I felt terribly guilty. I used to look at Jack’s picture every day and talk to him. Once I got serious about Ben, that didn’t feel right. I still talk to Jack, and I think Ben would understand. I secretly keep a photo of Jack taped to the bottom of a shelf in my office for those times when I need him. I know that one day I’ll need to let him go if I’m to give myself completely to Ben. He deserves that.

Who is the most interesting secondary character in the Stone Mountain Mysteries and why?

Nora Cummings. She’s just twenty years old, but she’s quirky and adventurous. She has a crazy past with a birth mother who died when she was a baby, an adoptive mother, cousins who cause her nothing but trouble, and a father she never knew, and yet she stays positive about life. Somehow she turned from an acquaintance into my best friend even though I’m ten years older than her.

Is it difficult to be the central character in a mystery series? Are you always conscious of being in the spotlight?

When you’re the central character you’re always aware that you’re being watched and judged by readers. I hope they approve of me. I try to do what’s right, but sometimes that ends up hurting someone I care about. Those actions are the ones I’d like to hide from the reader.

If you could change one thing that Kristina wrote about you, what would it be?

I’d like to give more thought to the consequences of my actions. I’m very headstrong, and sometimes get others or myself in trouble by acting without thinking.

What’s one thing you’re glad that you had the guts to follow through with?

Marrying Ben! I plan to spend my life with him. After Jack died, I was scared and I decided never to let myself fall in love again. The loss was too much. But then I met Ben and my heart did what it wanted; my brain seemed to have no control over my emotions. So here I am, in love again and setting myself up for another big hurt.

What is your greatest strength?

I’m not afraid. I face whatever I need to and deal with it. When Jack died, I used that strength to survive and move on with my life. I left my comfortable job in Human Resources with the Canadian government in Ottawa for a job as an HR manager at a ski resort. I moved across the country, left my friends and family, and started over. No fear: that’s my motto.

Can readers look forward to reading about you again after they finish Avalanche?

Yes. I’m making Kristina write Torrent, a fourth murder mystery at Stone Mountain. Our friend is killed while driving his ATV. He’s pushed into a river and drowns. Of course, I have to investigate and Kristina has to write my story. I won’t get out of her head until she finishes writing it because I need to know who killed him.

Will your stories always be set at Stone Mountain?

I think so. Stone Mountain has become an important part of me. I don’t think I’d feel completely whole if I had to live anywhere else.

What actress would you like to play Kalin Thompson in the movie versions of the Stone Mountain Mysteries?

Kristina doesn’t let me watch movies, so I don’t know of many actors. I guess it would have to be someone who can act, is around 30, is physically fit, can ski, and loves dogs. I have no idea who that would be. Maybe you could suggest someone, and I’ll tell Kristina.

Keira Knightley is now 31 and she’d certainly draw crowds to the movie, although they may have to use a stunt double for the ski scenes. In the meantime, where can readers buy your first two books?

On Amazon, they can buy Descent here and  Blaze here. 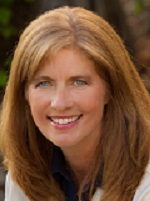 Here’s a bit of Kristina’s background–so  this blog post isn’t just about me: Kristina Stanley is the best-selling author of the Stone Mountain Mystery Series. Her first two novels garnered the attention of prestigious crime writing organizations in Canada and England. Descent was a finalist for Crime Writers of Canada’s Unhanged Author award, and Blaze was a finalist for Britain’s Debut Dagger. Her short stories have been published in Ellery Queen Mystery Magazine and The Voices from the Valleys anthology. She is also the author of The Author’s Guide to Selling Books to Non-Bookstores.

Thank you, Kalin. It was great having you here today!

4 Responses to Schmoozing with Kalin Thompson