On the trail of Henry Joy

Posted on August 28, 2018 by rosemarymccracken

A few years ago, I discovered that I shared my surname with an 18th century Irish rebel. I don’t know if we’re related (unlikely, I think, but you never know), but I was determined to learn more about Henry Joy McCracken and his activist sister Mary Ann on our trip to Ireland this month. Here’s what I found:

Henry was the fifth of seven children born to of prominent Presbyterian Belfast family in 1767. It wasn’t a great time to be Roman Catholic or  Presbyterian in Ireland. Presbyterians were treated far better than Catholics, but they were required to tithe the Anglican Church of Ireland and were prohibited from holding government office or military commissions. It certainly helped that Henry’s family was well-to-do. His father was a shipowner and his mother’s family, the Joys, made their money in the textile industry and founded the Belfast News Letter. 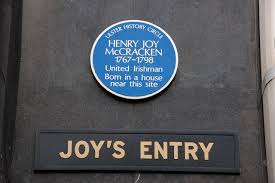 Joy’s Entry lane in the centre of Belfast.

Henry grew up in the McCracken family home in Rosemary Lane and, from an early age, developed a love of traditional Irish culture. He helped organize the Belfast Harp Festival, and helped preserve Irish folk music by having songs and ballads set down in musical notation. But he was raised to work in the family’s textile businesses, and by the age of 22, he was running a cotton factory.

Henry cared about the welfare of his workers. Many were Catholics and were prohibited from attending school, so Henry and Mary Ann opened a “Sunday school” where workers learned to read and write. The McCrackens’ school was closed by the Anglican vicar of Belfast who regarded it as potentially subversive.

Henry was more interested in the arts and social reform than the family firm, which may have been why the Joy, Holmes and McCracken cotton mill went out of business. Henry was particularly attracted to the idea of Irish independence. He was a founding member of the Society of the United Irishmen, which started out seeking  parliamentary reform  in certain areas, such as the vote for all Irish men (but not women), and evolved into espousing complete separation from England and the founding of an independent Irish Republic. Henry’s job was bringing the Defenders, a secret Catholic agrarian society, into the United Irish movement, and he used his business travel around the country as a cover for this work.

His political activities alarmed the authorities. He was arrested in October 1796 and imprisoned in Dublin’s Kilmainham Jail for 13 months. Released on bail in December 1797, he returned to Belfast and was elected the United Irishmen’s general for Antrim. He came up with a plan to mount simultaneous uprisings in different parts of the country and led a July 7, 1798, attack on the town of Antrim. His band of rebels was defeated by the British, and Henry and his men headed for the Antrim hills.

Mary Ann set out looking for her brother, and arranged for him to be hidden. She obtained a forged passport for him and organized an escape to the United States. He was recognized as he boarded the ship, arrested, brought to Belfast for trial and sentenced to a traitor’s death. He could have saved his neck by implicating others but he refused to turn against his comrades.

Henry was hanged on July 17 at Belfast’s Cornmarket, on land that his great-great grandfather had donated to the city. Mary Ann arranged to have a doctor present to resuscitate her brother but the hangman did his job well. Henry was dead at the age of 30.

Mary Ann was a remarkable woman in her own right. Two years younger than Henry, she never married but she raised Henry’s illegitimate daughter, Maria Bodel. Mary Ann worked tirelessly for women and children’s rights, including the plight of child chimney sweeps.  She campaigned for the abolition of slavery in the United States and, in her 80s, she could be found passing out anti-slavery leaflets on the Belfast docks to those boarding U.S.-bound ships, claiming that America was not so much “the land of the brave” as “the land of the slave.”

I like what I’ve learned about Henry and Mary Ann. I wouldn’t mind claiming them as family.

Rosemary McCracken is a Toronto-based fiction writer.
View all posts by rosemarymccracken →
This entry was posted in Uncategorized and tagged Henry Joy McCracken. Bookmark the permalink.

4 Responses to On the trail of Henry Joy